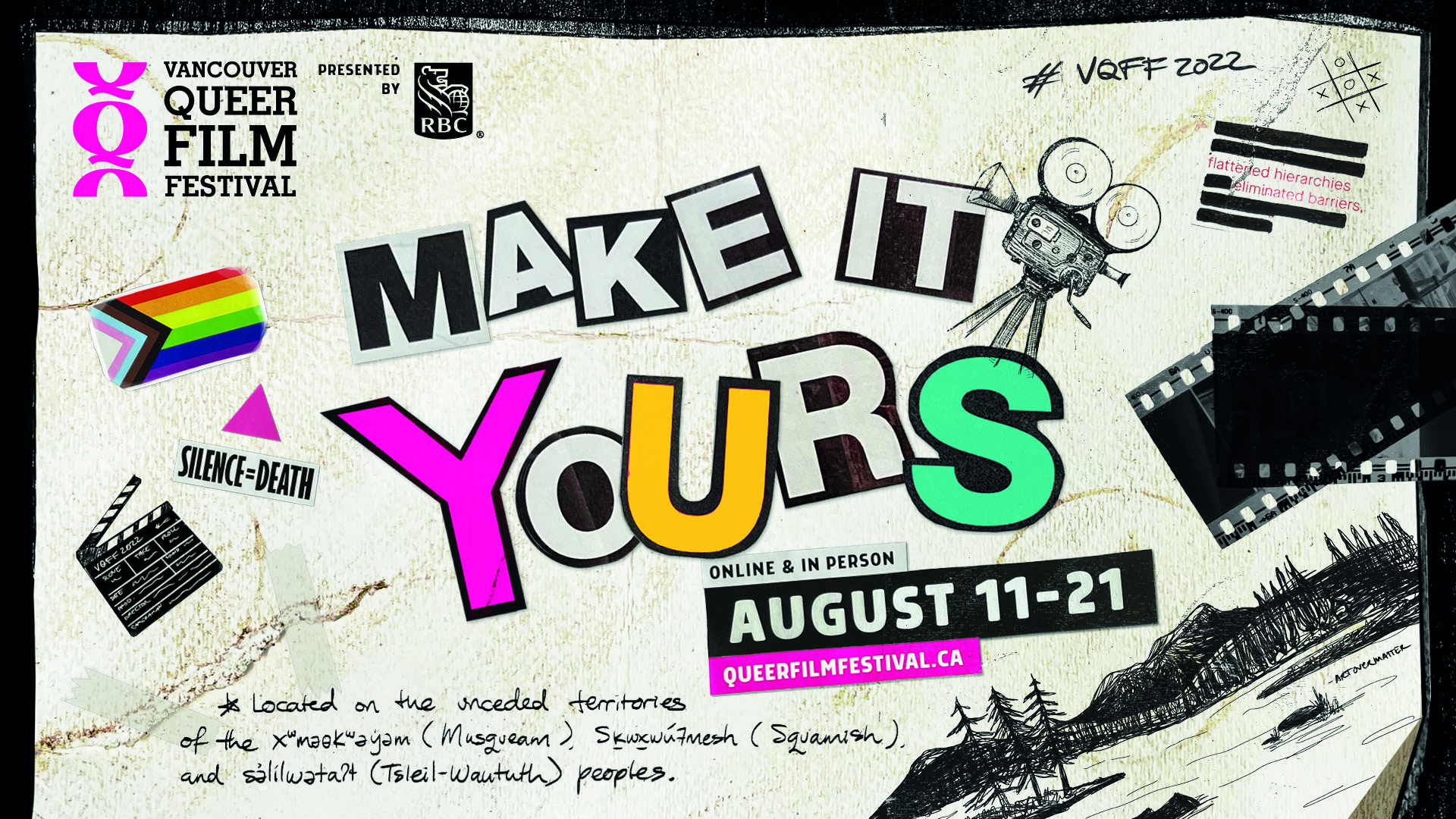 VANCOUVER – Out On Screen is excited to bring back the Opening Gala of the Vancouver Queer Film Festival (VQFF), presented by RBC, on Thursday, Aug. 11. The Opening Gala film The Empress of Vancouver, an ode to local drag icon Oliv Howe by local filmmaker Dave Rodden-Shortt, is screening at the Vancouver Playhouse and will be followed by a fabulous queer royalty-themed Opening Night Party at šxwƛ̓exən Xwtl’a7shn Plaza (Queen Elizabeth Theatre Plaza).

The 11-day festival, with the theme “Make It Yours,” will feature 97 films from more than 20 countries, along with post-screening Q-and-A’s with filmmakers, local performing artists, and industry and community workshops.

Purchase all-access festival passes, digital-only passes, or individual tickets at queerfilmfestival.ca. Browse the full program online or in the PDF of the print Festival guide.

“Out On Screen is finally returning to the big screen with its first in-person celebrations in years. We’ve all been working so hard on it, and it’s finally happening. I cannot wait for you to relish with film and party goers, while exploring all of the local and international films, programs, and workshops we carefully brought together for the 34th annual film festival,” says executive director Brandon Yan.

In keeping with the “Make It Yours” theme, the festival has also added the MOTORBIKE/SUPERDYKE exhibit, Aug. 16-20, co-presented by Sum Gallery, comprised of VQFF alumni artists. The opening party is Saturday, Aug. 13 at  Sum Gallery.

“We have artists Cheryl Hamilton and lisa g showcasing a collaborative multimedia installation about coming out and navigating through queer stereotypes,” says Yan. “The exhibit will include illustrations, prints, an animated film and zines, which was the medium inspiration for this year’s festival guide.”

Festival goers can expect a jam-packed opening weekend at VIFF Centre with workshops like Queer Collective: VQFF Programmers Talk (Aug. 13), which explores how participation and interconnectivity in queer film and arts practices can create a more inclusive arts community. The panel is free with a $5 VQFF membership.

Our film offerings include:

Making his directorial debut, J.E. Tiglao has created the first Filipinx narrative feature with an intersex main character. The groundbreaking drama Metamorphosis tells the story of 15 year-old Adam who finds out he is intersex after getting his first period. The in-person screening on Aug. 14 is open exclusively to self-identified QTBIPOC with special consideration to Filipinx people, and is followed by a conversation with festival programmer jas calcitas and members of Vancouver Pinoy Pride Society.

Obsidian: Black Queer Cinema, Aug. 14 at VIFF Centre and online, returns with a collection of shorts guest curated by Mahlet Cuff titled AS I AM. AS I AM explores the joys and challenges of navigating the unique experience of being Black and queer and will be followed by a pre-recorded Q-and-A with Mahlet Cuff, Ayo Tsalithaba, and Dr. Kwame McKenzie.

The Youth Gala film, Being Thunder, Aug. 16 at The Cinematheque and online is an intimate documentary following Sherenté Harris, a Two Spirit teenager as s/he comes of age. This film was a four-year collaboration between director Stéphanie Lamorré, Sherenté, and their family. It is a story of colonial resistance, Two Spirit leadership, and the power of young people.

Local documentary Emergence: Out of the Shadows, Aug. 19 at The York Theatre and online, follows the journeys of Kayden, Jag, and Amar, as they navigate disparate experiences surfacing their queer identities within conservative South Asian families. A Q&A with the cast and crew follows.

All Boys Aren’t Blue, Aug. 19 at The York Theatre, is based on George M. Johnson’s critically acclaimed memoir of the same title. Reflecting Johnson’s experiences as Black masc and non-binary, the film explores themes of Black queerness, queer identity assumptions, cultural normativity, and HIV/ AIDS in the Black community. This screening features an interdisciplinary program with live poetry performance.

About Out On Screen

Out On Screen is a charitable organization that illuminates, celebrates, and advances queer lives through film, education, and dialogue. The Vancouver Queer Film Festival creates a dynamic platform for queer cinema that reflects a diversity of experiences while connecting and strengthening our communities. The award-winning Out In Schools program brings age-appropriate queer cinema into school classrooms to combat homophobia, transphobia, and bullying, and to provide the language and tools for inclusion. Out On Screen is proud to be among the leaders in Canada working to create an equitable society where sexual and gender diversity are embraced. www.outonscreen.com

40 years of HIV on screen